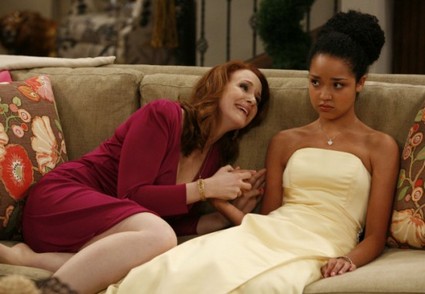 If you have not seen and episode of I Hate My Teenage Daughter, it is set in suburban Austin, stars Jaime Pressly as Annie, single mom to a teenage daughter. Her next-door neighbor and comrade in insecurity is Nikki (Katie Finneran), also newly divorced and also raising a teenage daughter. To both Annie and Nikki’s horror, their daughters, Sophie and Mackenzie, are popular girls with mean streaks — the exact opposite of what Annie and Nikki were like as teens.

Tonight’s episode of I Hate My Teenage Daughter is called “Teenage Cotillion” and we have the synopsis and sneak peek video below for your enjoyment!

Synopsis: As the girls prepare for a father-daughter dance, Annie and Jack suspect Matt will bail on Sophie – as usual. So Jack is on stand-by with his tuxedo. Meanwhile, Mackenzie doesn’t want Nikki to attend the dance and embarrass her. But it’s Gary who ends up being the center of attention in the all-new “Teenage Cotillion” episode of I HATE MY TEENAGE DAUGHTER airing Wednesday, December 14 (9:30-10:00 PM ET/PT) on FOX.