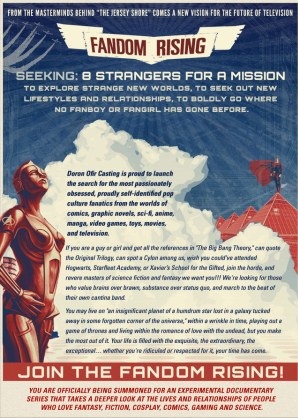 The company behind the casting and production for The Jersey Shore have announced this week that they’re currently looking for a total of eight cast members for a brand new show. This show is going to be called Fandom Rising, and what it’s looking for are people who’re incredibly proudly obsessed with either comics, sci-fi, graphic novels, manga, anime, video games, toys, movies, and television.

The show will be looking focusing on these people’s lives and for their love of fantasy, comics, gaming, science, cosplay, fiction, and etc. I actually think I will enjoy this show.., since I’m a self-proclaimed anime, manga, gaming, and movie fanatic, I think I’ll actually be able to relate to some these people.

I highly believe that this show is going to be a lot better than The Jersey Shore, because The Jersey Shore has too much idiotic drama that really just makes you laugh. Not only because these moments are funny but hilariously pathetic. I find that this new show will have less drama and a more positive and realistic view on a nerds life, so I can tell you that I’m going to watch this show when it comes out.

Also the shows is taking applications to be on their show here http://www.fandomcasting.com/