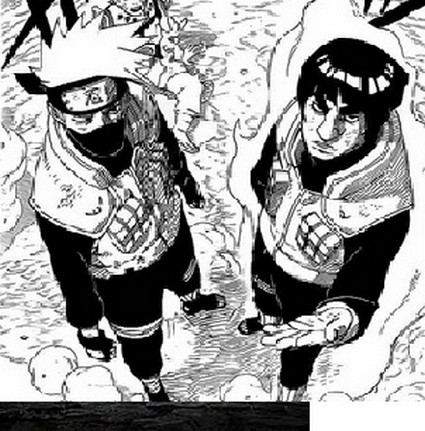 This chapter was nothing but amazing, hell, it’s the best chapter released in weeks. Kishimoto really did well with this one and it simply just took the cake most of all because of the last page.

It’s awesome seeing Killer Bee fighting of all the Jinchuriki in his Hachibi form, he uses his eight tailed whirlwind which basically throws Tobi and the Jinchuriki’s all around. His seal technique octopus hold was so cool, in his Hachibi form he spat out ink and then made a bunch of clones of himself to trap the Jinchuriki’s so he may seal them away, but that’s when awesome part number 1 happens. Instead of sealing them Tobi just forces them into going into their own tailed forms, where it’s simply only the chakra surrounding their body like when Naruto was against Pain.

Then the Jinchuriki attack and one of them used an ability called Flower Fruit Mountain, it sounds like some sort of fruit punch. Then after the five tails stabs Bee with his horn and Tobi right away jumps on Naruto, he’s about to finish him then all of a sudden the icing on the cake for this chapter happens. Gai comes in kicking Tobi against his head, forcing him to use his transparent like jutsu which makes his hand go through Naruto and Kakkashi pulls Naruto away. Now we see that the next possible battle we will see is going to be Kakkashi and Gai vs Tobi, I can’t describe how hard I geeked out at this. I just can’t stop anticipating for the next chapter, Kishimoto has really stepped up his game.