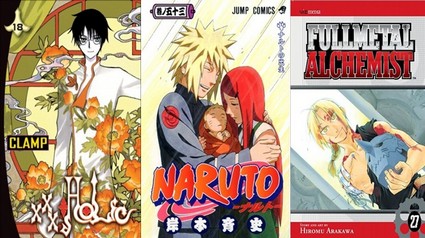 In third place we’ve got volume 18 of xxxHolic by CLAMP, I’ve only ever watched the anime and from that I can say that this series truly has a very comedic and interesting story that you really get into. What made this manga all that much better was the protagonist Watanuki, he just says some of the weirdest yet hilarious things.

In second place we’ve got volume 53 of Naruto by Masashi Kishimoto, by far Naruto would have to run as one my favourite anime’s. The story never bored me and the whole concept of Naruto trying to save his friend Sasuke has a deep message that people should take the time to understand. In all it’s a great series that taught me a lot, and has inspired me in several ways.

In first place we’ve got volume 27 of Fullmetal Alchemist by Hiromu Arakawa, Fullmetal Alchemist would have to be the first anime I’ve ever watched that had more than 24 episodes and the first one to have gotten me so interested that I simply finished it in about a day and a half. Fullmetal Alchemist is one of the greatest stories hands down; it has a great concept of a brothers bond with the protagonists Edward and Alphonse Elric. If you have been getting slightly interested in anime or have never heard of this title before and are a casual fan, then do yourself a favour in reading the manga or watching the anime you’ll surely not be disappointed.