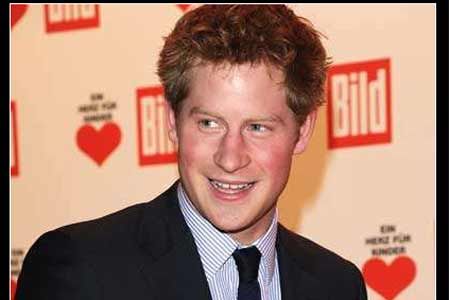 Britain’s Prince Harry enjoyed a trip to Winter Wonderland last night and almost managed to excape notice by the crowds.  The 27-year-old royal almost went unnoticed at the festive attraction in London’s Hyde Park where he and friends visited the traditional Christmas markets but his distinctive red hair gave him away.

Fellow reveller Rachel Jones exclusively told BANG Showbiz: “Harry looked like he was having a great time with his friends, chatting and larking about as they wandered through Winter Wonderland. They just looked like a normal group of guys, you wouldn’t have known he was a prince! It was only when he took off his baseball cap to scratch his head and I could see his red hair that I knew for definite that it was him.”

Although Harry was polite and friendly, his bodyguards were nearby at all times.

Rachel added: “I tried to go over and have a photograph, but a security guard discreetly told me, ‘No pictures.’ Still, it was nice to see that he was able to have a fairly normal evening out with his mates.”

Following his festive fun, Harry and friends dined at Jak’s restaurant in South Kensington and then partied at Zefi bar before leaving in the early hours of the morning.

Twitter user @HWalesWatch wrote: “Prince Harry was at Jak’s restaurant in Lon. tonight before drinks at Zefi while friend Nat. Pinkham partied down the street at BungaBunga.”

Photographer Jesal Parshotam wrote on his twitter account @therealjesal:“#PrinceHarry brushed shoulders with a christmas tree as he left #zefi bar in kensignton Sw3 at 1.30am. He looked very festive.”