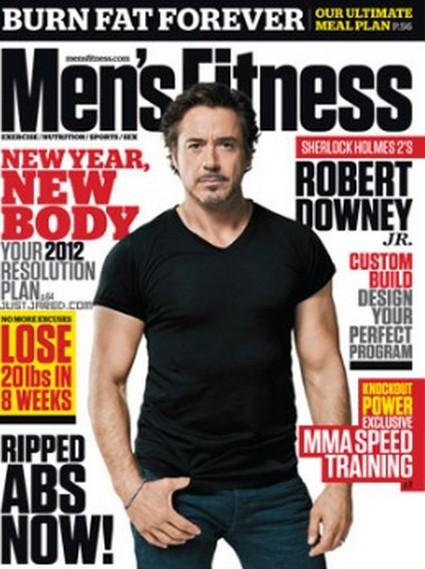 Robert Downey Jr. is a great and talented actor, believe it or not he’s in my top ten favourite actors of all time! It’s pretty rare for me to ever hate a movie he plays in.

In a recent interview with Men’s Fitness magazine, Robert Downey jr., talked about him wanting to be a super hero or an action hero.

“I guess I had some notion about [being an action hero]. I think I wanted to be able to look good and defend myself and all that stuff. I’ve always really enjoyed that genre, but I mean, it’s pretty outlandish. I’m not particularly tall or strong or fast or aggressive. Yet, I’m not faking it. To me, it’s a cosmic chuckle.”

I find it quite ironic that he wanted to be a super hero, since today he’s pretty well known for his role as Tony Stark/Iron Man.

Robert Downey Jr. will be reprising his role as Tony Stark/Iron Man in the upcoming new super hero movie The Avengers which is set to be released May 4th, 2012, I can’t wait for this movie and after that one, Iron Man 3 in 2013.

Ashley Tisdale Shopping With her Mother at Chanel & Other News