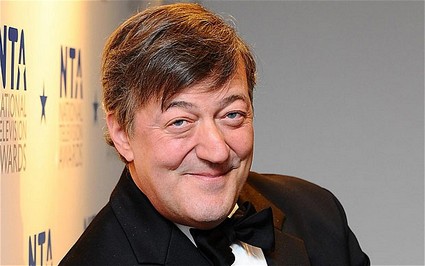 Stephen Fry is an English actor, screenwriter, author, playwright, journalist, poet, and many other things.

There was an interview with Stephen Fry about his role in the new upcoming master piece The Hobbit: An Unexpected Journey, he talked about how he liked acting in this film but there was just one thing wrong.

He had a complaint on one thing he had to do to get ready for his role, and that is the diet. He said that he had to stay on a diet that consisted of grossness. This unbelievably gross diet had him eating things like testicles. Peter Jackson made him do this, to help him get into character.

Fry plays the Master of Laketown; he is described as something that isn’t pleasant to look at. Stephen Fry mentioned that he had to wear a bald cap, with comb over wig, wispy mustache, beard, blotchy skin and horrible disgusting finger nails.

I for one would eat testicles to have a role in The Hobbit, it’s completely worth it, sure it’s disgusting but destroying my taste buds is a sacrifice I would be willingly take.