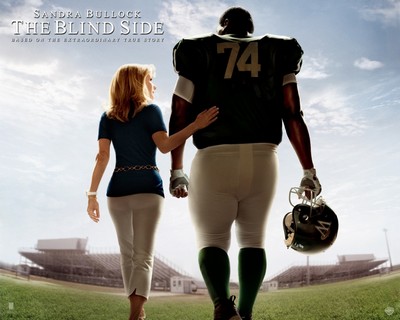 It has been announced from Netflix that the most-rented DVD movie of all time is The Blind Side which stars Sandra Bullock. I’m not surprised at all, this movie is one my favourites. It has something that not too many movies have, it’s heartwarming. If you haven’t seen this movie then try renting it and giving it a watch, because you are seriously missing out on something amazing.

The movie takes place in Memphis, Tennessee and is about a 17 year old boy named Michael who’s bigger than the average person his age, who has been in the care of foster families for quite a while. He runs away from every from every home he’s placed into and sleeps on his father’s friends’ couch. He’s enrolled in school by his father’s friend; this is just the beginning of his amazing journey.

In 2nd place was the movie Crash, once again another great film starring Sandra Bullock again, Brandon Fraser and Ludacris. If you haven’t seen this one you’ve got to, it’s really interesting on how every ones lives literally crash and collide into each other.

The others that make up the top 5 are, The Bucket List starring Morgan Freeman and Jack Nicholson in third. Following The Curious Case of Benjamin Button and The Hurt Locker. All of them are pretty good movies as well and are worth a watch.

In my opinion all of these movies deserve their ranking of being the most-rented DVD movies of all time especially The Blind Side, I simply love the movie.