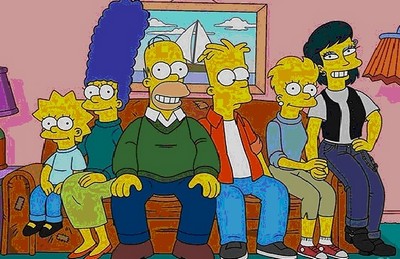 I’ve grown up watching a lot of the Simpsons and I absolutely love it, every time I watch an episode I get this nostalgic happy feeling. Homer is one of the funniest cartoon characters in my opinion; he’s not the brightest guy and every time he screams he gets me laughing like crazy. Bart is another favourite of mine for his hilarious pranks , I love it when he prank calls Moe. Also a favourite of mine but not shown all that much is Ralph Wiggum, he just does very weird things and is also not that bright at all. He’s worse than Homer when it comes to a competition in intelligence.

Now apparently people have been saying that the show hasn’t been doing as well as it previously has done in the past, but that’s changed with the recent release of the episode 495 “Holidays of Future Passed”. Many people have said it’s the best years.

The episode starts out normal but jumps thirty years into the future shown through the Christmas cards of the Simpsons family, which shows us their life throughout the passing years. Many things have changed Lisa has a lesbian fling during college but becomes a successful business woman married to Milhouse, Maggie begins to use the voice she never used as the lead singer of an international band and Bart is a low life, a divorced dad with two sons  who he doesn’t see that often.

I don’t want to say any more in what happens in the episode, I don’t want to ruin it for those who haven’t seen it yet. Seriously I agree with what all the people and critics are saying, it’s one of the best episodes in a long time and worth a watch, you can’t miss it.