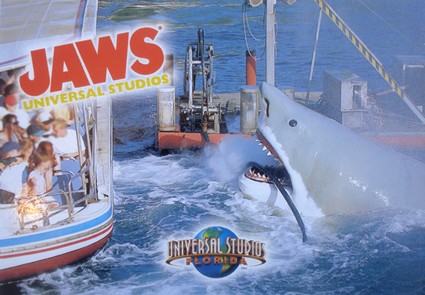 Universal Studios Florida is planning to close one of the oldest and most popular attraction next month, in order for them to replace it with a new amazing attraction.

Universal Studios Florida has announced that on January 2nd Jaws will be no more after 20 years, it will be permanently shut down. Jaws the ride is based on a classic and an all-time favourite movie of mine that was directed by Steven Spielberg in 1975.

This truly upsets me, I’ve been to Universal Studios Florida several times and have loved riding the Jaws ride since it always gave me that nostalgic feeling. Hearing about it being shut down makes me want to ride it one more time for old time’s sake, but if I don’t head there soon I will have to visit Universal Studios Japan to ride their version of Jaws as well as they have the only remaining Back To The Future: The Ride left on Earth.

Apparently that’s just the beginning of this story; the theme park hasn’t released any more information on what attraction will be meeting its end next but I’ve found out that in Universal Studios Hollywood they don’t have an E.T. ride anymore; it was removed from the theme park.

There are rumors that there might be a Wizarding World expansion, or that the Transformers ride that is currently being installed in Singapore and Hollywood might find it’s way to Florida.

The Revealing of a New South Park RPG