Will Star Wars: The Old Republic Overtake World of Warcraft? 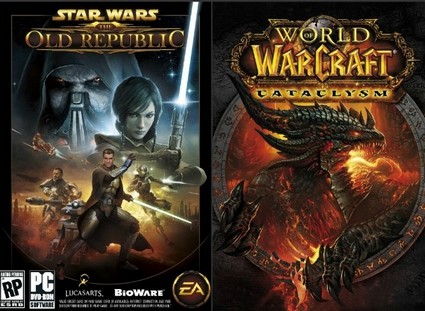 I’ve been playing “World of Warcraft” for a long time; to be exact, it was just a little before the Burning Crusade expansion pact was released. At that time I did believe it was the greatest MMO. Wrath of the Litch King came out and was amazing but then we got Cataclysm, to be honest I loved the new races but there was one big problem that I easily recognized and couldn’t ignore, World of Warcraft became too easy. The leveling up took no time, the game even felt as if it were incredibly dumbed down. I honestly got bored and fed up with it; I just couldn’t enjoy it anymore.

Then it happened, all us MMO lovers’ prayers had been answered. The announcement of “Star Wars: The Old Republic”, I can’t even put into words how excited I was. I literally pre-ordered the game as soon as possible and have been slowly anticipating its release, simply because it’s different. I believe this game is going to change MMO’s as we know it, not only is this the first ever MMO to be fully voiced but this game has a key element several MMO’s lack, story. The MMO’s we’ve had up to now really had no story line to follow, I find that this is what’s going to make me love this game even more.

Star Wars is just so incredibly diverse, there are so many different classes that you’d like to choose from but then they also all have their own stories. It makes the decision so much more difficult, personally I’ve spent so much time just thinking over what I’d play as and after about 3 months, I finally decided. Yes, 3 months! You have to take some much information about the game before even choosing, like for example, I love the new addition of companions and each class gets its own set increasing the difficulty of choosing again. In the end I believe were all bound to just try out every class, I find that all of them seem to be great in their own way.

Another point that could prove that Star Wars has the chance to overtake World of Warcraft isn’t only the franchises popularity; take a look at World of Warcraft’s new expansion Mists of Pandaria. It’s basically shoving Kung Fu Panda in World of Warcraft. I believe this expansion is going to bomb completely it just really turned me off. I know many loyal World of Warcraft fans who have actually quit; they all say that the next expansion looks like a waste of money and a complete joke. The new class is the only thing that’s promising in the expansion; I think a Monk class seems interesting but other than that it’s bound to fail. I’ve read up on what their doing with the game and it just seems like it’s only going to get much more dumbed down. World of Warcraft has finally just disappointed me; it most likely is going to lose its throne this year.