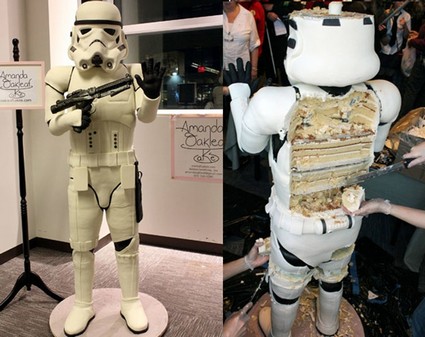 This galactic masterpiece of a cake weighs around 300lbs and was made in the shape of an Imperial Soldier from the Star Wars Universe for a sci-fi convention.

Tiler and Amanda Oakleaf and their team of ten baked and built this 6ft 4in Stormtrooper, using 208 eggs, 140lbs of sugar and 55lbs of marshmallows. It took them all around two weeks to complete the cake. This massive cake fed more than 600 nerds at the Arisia Sci-Fi Convention in Boston Massachusetts.

Tiler said “We have always dreamed of doing something like this and in the end we made it because we could really. It took two weeks to make the cake with the whole team involved, but we wanted to make sure that there were people to eat it in the end because we didn’t want to waste food.”

I got to say that I’m jealous that I didn’t get to eat a Stormtrooper cake and all these lucky nerds did. I find that they did an excellent job with the Stormtrooper. The type of cake I’d like to see is a life-size Darth Vader or Jabba the Hutt cake, now those would be difficult to bake and build, but awesome to eat!