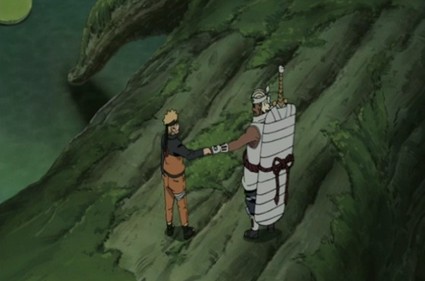 This episode was really amazing especially right in the beginning. I just loved how Naruto decided to deal with the darkness within him on his second try; even though his dark side tells him how foolish he is to trust the people who once ostracized him completely. Naruto very well knows what happened in his past, and it’s just amazing how he states that it doesn’t matter. He loves his village and everyone that lives there, and he would do anything to protect it. So his darkness is breaking down and Naruto’s decision was just touching, instead of fighting his darkness, he simply accepts it. 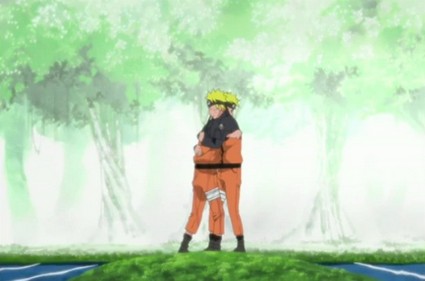 So Bee leads Yamato and Naruto to the next challenge behind the waterfall, it’s a giant temple with many headless statues. Bee states how the headless statues are in honour of all those who failed the next test, which is sticking your head within a stone lions mouth. So Naruto does it and pulls out, no longer having a head. It was so hilarious, Yamato is freaking out and doesn’t know what to do and Naruto just pops his head up. It is interesting seeing how similar Bee and Naruto are, both of them have a very positive attitude and Bee also did the same joke when he did it. 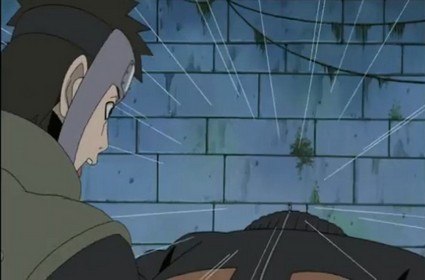 So next is Naruto’s new challenge which is learning how to control the Nine Tails within him, so Naruto and Bee enter his subconscious. This was just awesome and shows how amazing the next episode is going to be since it leaves off right where Bee has done all he can do and it’s Naruto vs. the Nine Tails. Ending it off with Naruto in his sage mode attacking with a giant rasengan, no doubt the next episode is going to be incredible. 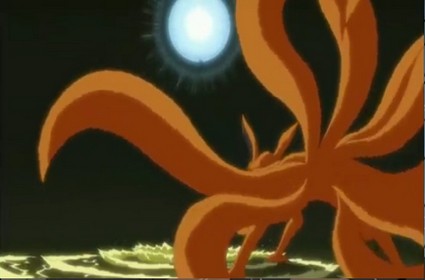