Ariel Winter Does Not Have a Cell Phone 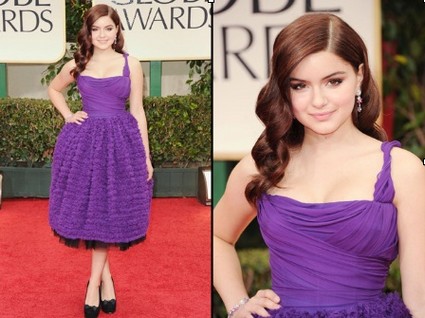 Ariel Winter was a giggling, nervous sight at the Golden Globes, but she managed to come off as sweet and mature for a 13-year-old. The Modern Family actress, who was looking beautiful and age-appropriate in Dolce & Gabanna, told Guiliana Rancic that she was “a little nervous” for the event, but she thought it was “really cool”.

Rancic asked, shocked,  “How do you talk to your cast and crew?” She replied, simply, “I see them in person!“

If that doesn’t sound down-to-earth enough, the star said she was going to celebrate by going out to dinner with a few friends. Let’s hope she doesn’t become another good-girl-gone bad with her teenage years to come, as so many have done so before her (cough, Miley Cyrus).

Anime Review: One Piece Episode 531 ‘Ryugu Palace! Journey with the Shark We Saved!’