Dr. Dre in Trouble with PETA 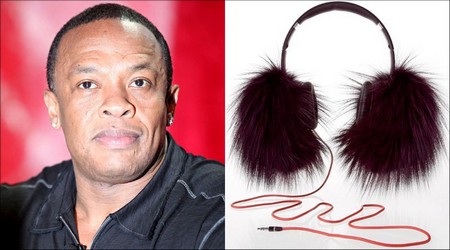 Popular rapper Dr. Dre has gotten himself in trouble with PETA, he’s planned on selling headphones that have what are believed to be real fox fur. Teaming up with the designers at Oscar de la Renta they created new limited addition headphones that are covered in silver fox fur.

The new pair of headphones has angered the bosses at PETA. Executive Michelle Cho has even took the time to write a letter to Dr. Dre, stating how he should not use animal furs or exotic furs for his products.

She wrote, “Foxes, minks, rabbits, and other animals – including cats and dogs – are bludgeoned, genitally electrocuted, strangled with wire nooses, drowned, and even skinned alive for their pelts. Most animals killed for their fur are slaughtered in China, where there are no penalties for those who abuse animals on fur farms. With so many fashionable, cruelty-free materials available these days, we hope that you will keep animals in mind and choose not to use fur or exotic skins in your collection… You have a tremendous amount of influence on young people – won’t you please consider using your platform to advocate kindness toward animals by pledging never to design with real fur and exotic skins?”

PETA does have a point that Dre shouldn’t use the furs, so I think Dre should just use fake fur. It’ll stop PETA’s whining and complaining and I don’t think it’ll be all that different looking. But it’s kind of hard to take them (PETA) serious, after what they did to Super Mario – believing how he wore his tanooki costume was such a horrible thing. But I guess every organization fighting for a cause always has an idiot amongst them, sometimes even a lot more than just one.