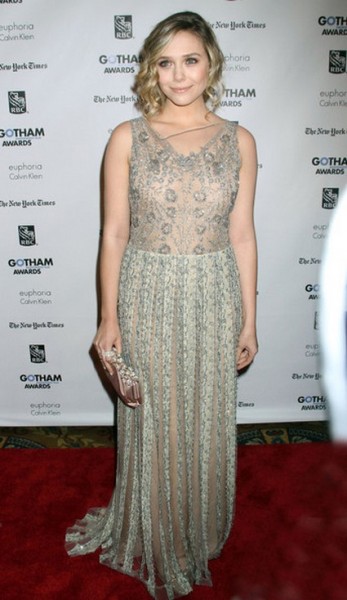 Elizabeth Olsen has learned a lot from her older sisters by observing them, though she insists they never tell her how to behave or get ahead in her career.

She said: “It’s always felt as though Mary-Kate and Ashley have been women, while I’ve been the kid. But we’re very close and I look up to them a lot. I wasn’t really affected by their fame until I went to college. People would expect me to be partying and all sorts of stuff. It was really strange.

“We’ve never had a conversation about [fame], but I learn by example. They try to keep their lives private and they work their asses off. People have this idea of them swanning around the world, partying, but they’re at an office every day – I wouldn’t be able to do what they do. They have so much pressure on them. They tell me, ‘It’s all about being happy with what you’re working on and trying to be the best at it that you can be.’ “

The 22-year-old beauty also denied that her interest in pursuing a career in performing came from watching her sisters, who shot to fame after appearing in TV show ‘Full House’ when they were just nine years old.

She added in an interview with Australia’s Daily Telegraph newspaper: “My mother is a ballet dancer and I started dancing because of her, but that was about it. I think it may just be the nature of living in LA and going to school with people whose families all work in the arts.

“I went to a kids’ musical theatre camp with my best friend – he’s a singer now. Then I did ballet and singing lessons, and I also studied drama in school. Performing has always been part of my life.

Mary-Kate and Ashley Olsen Want Their Handbags To be Affordable