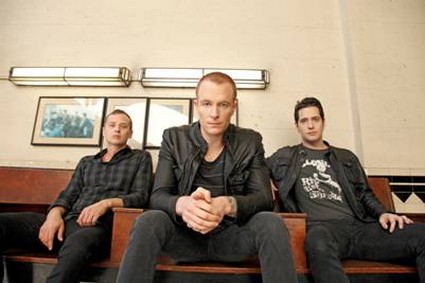 The multi-platinum pop-punk-rockers, Eve 6, are set to release their long awaited fourth studio album, Speak in Code (Fearless), on April 24th, 2012. Speak in Code is the highly anticipated  new release from the SoCal trio who spawned multiple top ten singles such as the smash #1 hit “Inside Out”, “Think Twice”, “Promise”, “Leech” and the radio mega-anthem, “Here’s to the Night”. Get the details of the release and stream their new track “Lost & Found” exclusively at AOL Music HERE. Full album track listing is below, and watch this space for touring and SXSW performance details!

Since their debut, Eve 6, revered for their brand of clever and high energy tunes, has sold over three million albums in North America. For their latest effort the band enlisted the talents of legendary producer Don Gilmore (Pearl Jam, Dashboard Confessional, Good Charlotte, Linkin Park), who also worked on their debut album. Serving as the perfect Spring time soundtrack, Speak in Code features the same stuck-in-your-head melodies the band has become known for, but with the maturity that accompanies perspective and experience. Opening track “Curtain” is a contagious pop gem about moving on, while first single “Victoria” features a soaring chorus and Eve 6’s trademark witty lyrics, and album stand out,

“Lost & Found”, is the quintessential  windows-down, top-of-your-lungs sing along.

Though Eve 6 disbanded in 2004, Max and Tony continued to play together in other side projects leading them to realize how important their original outfit was to them musically. In the late 2000’s, the two began touring again under the name Eve 6. “We always knew that the ideal thing would be to have Jon back and be the original three”, said Fagenson. In 2011, Siebels officially rejoined the band and, after signing with Fearless, the final piece of the puzzle had been placed. Now, re-energized and a few years wiser, Eve 6 is back in full force.

Eve 6 first burst onto the scene in the late ‘90s signing their first record deal as a group of high schoolers featuring Max Collins (lead vocals, bass), Jon Siebels (guitar, backing vocals) and Tony Fagenson (drums).  Their breakout self-titled debut album went platinum with lead single, “Inside Out” hitting #1 on the Billboard Modern Rock Tracks list with “Leech” and “Think Twice” registering in the Top 10. Their nostalgic  anthem “Here’s to the Night” from their follow-up album Horrorscope broke the top 30 on the Billboard Hot 100 with album-mate “Promise” cracking the Top 10. Having grown up in the music scene, Eve 6 know their way around a pop song and their forthcoming release is a natural progression staying true to their catchy, clever lyrics, while adding depth and a fresh take on life, love and rock.