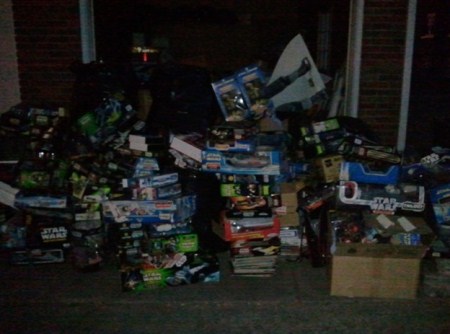 It all happened over just an argument when a fellow geek’s ex-wife got angry enough to throw out his collection. After this, I guess it’s quite easy to understand how she’s only his “ex” wife, because it doesn’t matter if these collectables weren’t vintage and worth a lot, there’s always a reason why someone collects something. For example, I’ve just started collecting stuff myself and I’ve realized how expensive it can actually be. So for this monstrosity of a woman who threw out this geek’s colletion, there’s no better punishment for her, but to be thrown into the Sarlaac Pit.

Here’s a photo of the aftermath of this carnage, as you can see there are several collectables spread about but remember, that’s not even all of them. As you can see this person was really a huge fanatic of collecting these treasures that they are even still in their packaging. We can only hope that no harm was done to them.

In the end if you yourself are a collector of what could be considered “geek” like merchandise, it’s best to find a girlfriend/boyfriend or even when you marry someone you should always choose someone who loves the same stuff as you do.