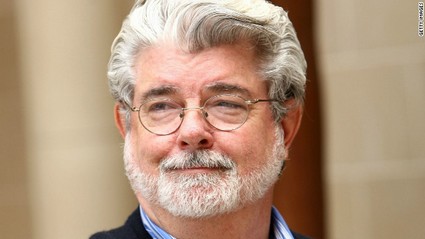 George Lucas has mentioned how difficult it was for him to get this new film Red Tails, he had to spend around $100 million dollars to make Red Tails because studios just weren’t interested in producing his idea of a film about African-American WWII fighter pilots. George Luca has brought us Star Wars and Indiana Jones, yet was rejected by all the major studios for this new project.

Experiencing the difficulties with Red Tails is the main reason why Lucas has said “I’m retiring. I’m moving away from the business, from the company, from all this kind of stuff.” Lucas gave himself an excuse in case he ever had the urge to make a fifth installment in the Indiana Jones series with Spielberg, but apparently Red Tails will be the last major blockbuster that he will be creating.

Rick McCallum said “Once this is finished, he’s done everything he’s ever wanted to do; He will have completed his task as a man and a filmmaker.” I assume that Rick will take responsibility for the upcoming major projects like the Star Wars TV show.

Another thing that has getting on Lucas’s nerves, is the internet. He has always seen himself as an independent film maker. He started out with his first two major films THX 1138 and American Graffiti; they were both re-edited by the studios against his wishes. Wanting to control the vision he had, Lucas worked hard on financial independence from studios so the final cut would be his own.

With this mindset Lucas made changes to the Star Wars films. The changes did not please the fans at all, it made him feel the same way as when the studios told him how to make a movie. Lucas said “On the Internet, all those same guys that are complaining I made a change is completely changing the movie.” He’s said that he has nothing against those who are re-editing his films, “I’m saying: ‘Fine. But my movie, with my name on it, that says I did it, needs to be the way I want it.” Apparently his vision all of these years were the changes he made like Han shooting first to Darth Vader yelling Noooooo! Since technology has advanced throughout the years it has finally allowed him to complete his vision of the movie, his vision is what he wants us to see and enjoy.

As for making more Star Wars films he’s said “Why would I make any more when everybody yells at you all the time and says what a terrible person you are?”

I got to say that I was not a fan of the changes that he made to the original trilogies at all, but I did enjoy the prequels. Sure Jar Jar Binks wasn’t needed in the Phantom Menace but it was still a good film and I liked Darth Maul and Qui-Gon Jinn. The Clone Wars was pretty cool, I didn’t hate anything about it, I really loved the fight in the Geonosian Arena. Revenge of the Sith was also good in my opinion, I didn’t like how many of the Jedi died but the lightsaber battles were awesome especially Anakin vs. Obi-Wan Kenobi. As you can see I admire his work, he’s got to be one of the most successful independent filmmaker to date. Lucas can easily create a film on his own, the only problem he has is that he needs to find a studio willing to distribute the final product.

George Lucas is an amazing filmmaker; he’s made films that have been around for decades. He’s the man who made me fall in love with films, Star Wars is in my top three of my all-time favourite movies and it brings back so many great memories. Even today I watch the films whenever I get the chance to.

Will Smith: Hancock 2 in the Making?