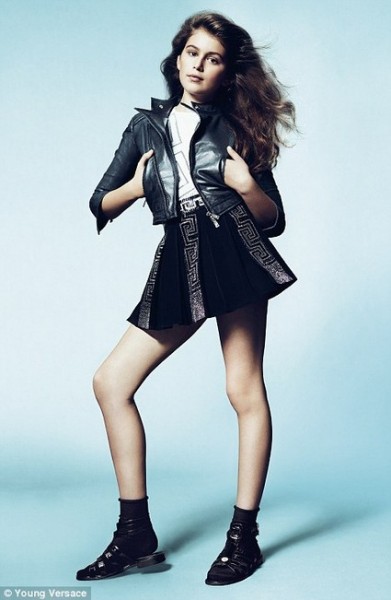 Kaia, 10-year-old child of Cindy Crawford and Rande Gerber has been praised by the brand’s creative director Donatella Versace, who says the camera “loves her”.  She said: “Like her mother, Kaia has a very special gift. The camera really, really loves her.

“Having Cindy on-set for the shoot took me back to all the amazing Avedon shoots we worked on together. It was such a special treat watching Kaia walk in her mother’s footsteps!”

Cindy is also delighted her daughter is following in her footsteps because she has such fond memories of being model for the Italian fashion house.

She said: “I’m so thrilled that Kaia was chosen to be part of the first Young Versace Campaign. I have so many fond memories of the times I spent with Gianni and Donatella. There is something so very special about the House of Versace.”

Cindy recently claimed models had a hard time getting work as they now had to sing and act in addition to looking their best.

She said: “I just saw the CoverGirl commercial with Taylor Swift and I thought, ‘Wow, it is so hard for models to get a job these days.’ “You have to sing and act, too. There doesn’t seem to be as much work specifically just for models.”

Avril Lavigne and Brody Jenner Tweet They Are Still In Love