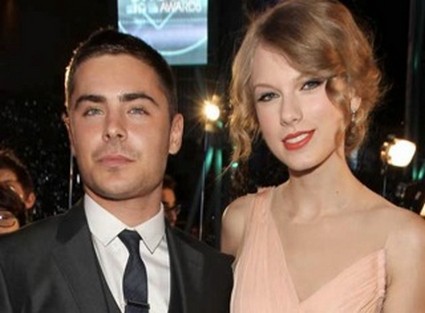 Taylor Swift and Zac Efron – who have been friends for years – were spotted sharing a romantic corner table at Los Angeles restaurant place earlier this month.

A source told US Weekly the pair – who arrived together in Zac’s Audi –“were deep in conversation and very giggly”.  However, friends of Zac, 24, and 22-year-old Taylor claimed the ‘Lorax’ co-stars were just enjoying a friendly night out.

One pal said: “They were in L.A. doing press stuff together, and after they were done, they decided to grab dinner.”  Another friend added: “They have been friends a long time. Taylor thinks Zac’s cute…[but] they are on totally different wavelengths.”

Zac previously dated his ‘High School Musical’ co-star Vanessa Hudgens while Taylor has endured a string of heartbreak, most recently when she was dumped by Jake Gyllenhaal in late 2010.

Speaking about her forthcoming album, Taylor alluded to their short lived relationship.

She said: “There’s just been this earth-shattering, not recent, but absolute crash-and-burn heartbreak and that will turn out to be what the next album is about.

“The only way that I can feel better about myself – pull myself out of that awful pain of losing someone – is writing songs about it to get some sort of clarity.”

New Still for ‘The Hunger Games’