New Still for ‘The Hunger Games’ 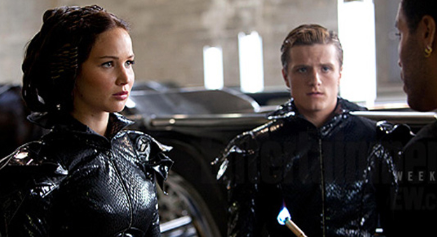 A new still from The Hunger Games is released in the newest issue of EW. The still features Jennifer Lawrence and Josh Hutcherson getting prepared to be lit on fire by their stylist. The two are prepping for the opening ceremony with Cinna (Lenny Kravitz) who is holding a candle, ready to ignight them.

Josh recently did an interview with MTV about the film and being on set. He revealed an incident when he pulled a prank on Lawrence:

They had a full life-sized dummy of one of our tributes that had gotten killed by a tracker jacker, and basically it’s all swollen and gnarly-looking and mangled, and Jennifer was out of her trailer so I took the dummy and put it inside her bathroom in her trailer. I wasn’t there for the big moment when she saw it, which I can’t believe I missed, but I’ve been told that she actually peed her pants in reaction to it. So, I was pretty proud of myself and amazed that someone actually peed their pants in fear, because I didn’t know that happened.

‘Great Scott’, a Love Letter to ‘Back to the Future’