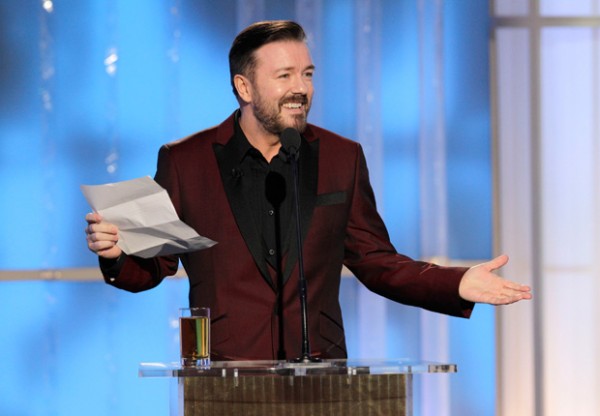 Meanwhile, Michelle Williams took home Best Actress in a Comedy or Musical for her portrayal of Marilyn Monroe – who won the same award in 1960 – in ‘My Week With Marilyn’.

Paying tribute to her six-year-old daughter with late actor Heath Ledger, Matilda, she said: “Gosh, you know I consider myself a mother first and an actress second and the first person I want to thank is my daughter. My little girl.

“Thank you to the Hollywood Foreign Press Association for putting in my hand the same award that Marilyn Monroe herself won over 50 years ago.”

Elsewhere, Meryl Streep picked up Best Actress in a Drama for her role as former British Prime Minister Margaret Thatcher in ‘The Iron Lady’, thanking the UK for allowing her to “trample over their history”.

She said: “Thank you to everyone in England who let me come over there and trample over their history.”

George Clooney picked up Best Dramatic Actor for his role in ‘The Descendants’ – which also bagged the ‘Best Dramatic Picture’ gong – while Madonna was perhaps one of the more stunned winners of the evening after winning Best Original Song for ‘Masterpiece’ from her directorial debut ‘W.E’.

Meanwhile, veteran Martin Scorcese received a standing ovation from his peers after winning Best Director for ‘Hugo’, and he admitted his 12-year-old daughter Francesca originally read the book and inspired him to produce the movie.

Ricky Gervais hosted the star-studded ceremony – held at Los Angeles’ Beverly Hilton Hotel – for the second year running, and his jokes proved as controversial as ever.

Opening the show, he said: “It’s so good having a job where you can get drunk and say what you want. And they still pay me.

“Tonight, you get Britain’s biggest comedian hosting the world’s second biggest award show on America’s third biggest network. Oh, sorry, fourth. It’s fourth. They’re like the Oscars but without all that esteem.”

“The Golden Globes are to the Oscars what Kim Kardashian is to Kate Middleton. A bit louder, a bit trashier, a bit drunker and more easily bought. Allegedly. Nothing’s been proven.”

‘The Adventures of TinTin’

Best Actor in a Drama

Best Actor in a Comedy or Musical

Best Actress in a Drama

Best Actress in a Musical or Comedy

Michelle Williams, ‘My Week with Marilyn’

Ariel Winter Does Not Have a Cell Phone