WikiLeaks’ Julian Assange to guest on ‘The Simpsons’ 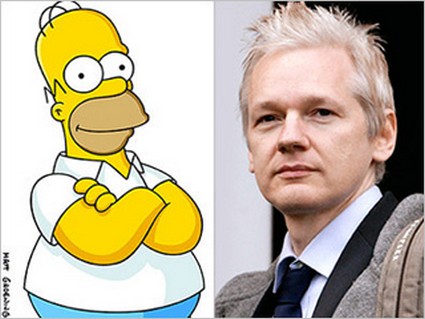 Julian Assange will play himself in the 500th episode of The Simpsons! EW has learned exclusively that the WikiLeaks founder/editor-in-chief recorded a guest spot over the summer that is part of the animated Fox comedy’s landmark episode airing Feb. 19.

In the milestone episode, Homer and Marge discover that the residents of Springfield are holding a secret town meeting to kick them out of Springfield for all of their shenanigans over the years. As a result, “the Simpsons go off the grid to this very rugged place where they meet [Assange], who’s sort of their new Flanders,” explains Jean. And how exactly is he like pious neighbor Ned? “Well, he lives next door,” quips Jean. “The similarities end there… He invites them over for a home movie and it’s an Afghan wedding being bombed.”