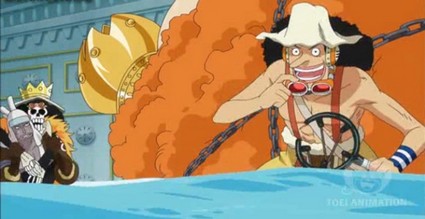 Right in the beginning I found it hard for me to pay attention to Luffy and Shirahoshi, all I had on my mind was that poor shark. The shark looks as if its going to die at any moment, choking to death with Shirahoshi in his mouth. Honestly, all I could think about is how bad I felt for that shark.

Then the action finally begins Hody bursts into Ryuugu palace and plans on killing all the Straw Hats, since he followed the same ideal as Arlong. All humans were weak and insignificant; they had no chance at fighting a fish man. Hody is pretty damn strong, he just grips the wall and it cracks and bursts into pieces. But I loved how Nami, Usopp, and Zoro remembered the name Arlong and Brook pretended as if it was familiar and then just said he’s never heard of him, where Usopp then kicks him in the head. 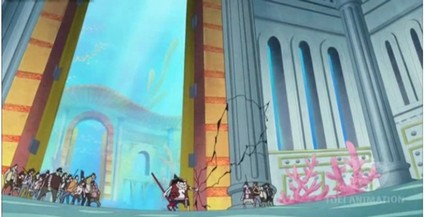 Then Hody starts using the water as arrows by changing its pressure, like Arlong did. Everyone is getting hit and such, but Nami and Camie leave the scene and while most of Neptune’s soldiers are getting hit we just see Zoro being the badass, he is just dodging all these arrows with ease. Then Usopp attacks all of Hody’s crewmates and Zoro goes for Hody but he uses one of his own crewmates as a meat shield. 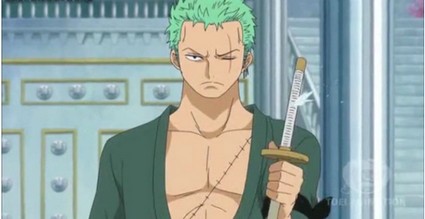 So with Nami and Camie gone, Usopp and Brook start untying all of Neptune’s soldiers. But then Zoro just can’t stop being a badass and challenges Hody underwater, using his three sword style to spin the water around him to defend him from the water arrows. Then that’s pretty much it, leaving the rest of the epic battle between the two for the next episode. 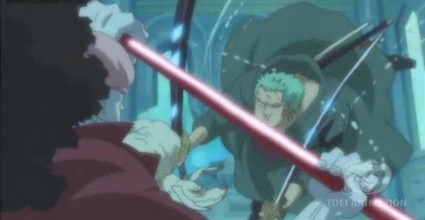 The ending was incredibly funny, we see the fish men and mermaids yelling at Sanji and Chopper that they kidnapped all the mermaids. To which Sanji makes worse by saying they didn’t kidnap them but he would actually love to. Making them angry, we then see Luffy drop in, and the people start yelling how they’d probably steal the princess but how it was highly impossible. Till the shark spits out Shirahoshi and all the people freaked out, I really enjoyed Choppers reaction telling Sanji not to look behind him because the beauty of the mermaid princess could possibly kill him. 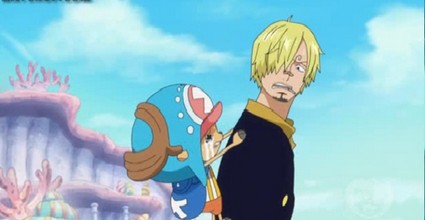 The action is just beginning and I can’t wait see the development of the fight between Zoro and Hody, and what happens to Usoop and Brook alongside him. I have high expectations for the next episode, so surely the action won’t be killed off as fast as it started.