Hoverboard from Back to the Future Gets a Release Date 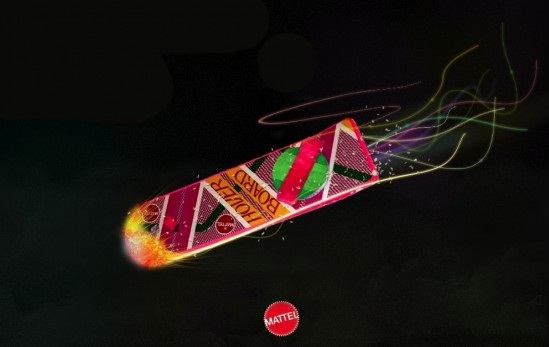 Time is flying by and the year 2015 is coming fast. With technology advancing every year, it seems like stuff seen in Hill Valley of Back to the Future: Part II haven’t come to mind for people to create yet, but I’m still hoping that we’ll be flying hover crafts in the next couple of years. Last year we saw Nike’s limited edition preview run of the self-lacing Nike MAG sneakers. This year at the New York Toy Fair, Mattel announced that they are going to be releasing the Hoverboard, a futuristic skateboard that obviously hovers – which Marty McFly used.

The self-lacing shoes by Nike won’t be releasing anytime soon though due to the fact that self-lacing technology hasn’t been made yet and won’t be ready till sometime in 2015.

This Hoverboard replica will look very similar to the one seen in the movie, it will be shipping some time during Christmas 2012, with limited pre-order in March. Now there’s not many times where I’ll say this but when I saw this Hoverboard I instantly thought “Shut up and take my money”.

I can’t wait to get my hands on this Hoverboard, It’ll give me a good reason to gloat to others about how awesome having a Hoverboard will be.

Transformers 4 to be released in 2014