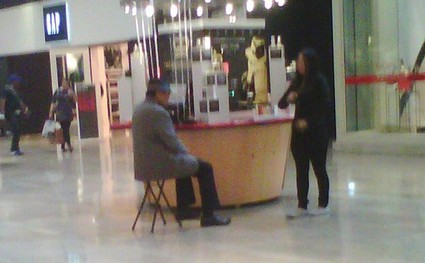 Joe Jackson, the man who formed one of the most successful musical groups in the whole world, The Jacksons, has been downgraded to the point that he’s selling cheap aftershave at a mall in Las Vegas.

He’s seen here sitting at his kiosk, surrounded by assorted fragrances. He wasn’t swarmed by customers, he was actually seen dozing off at times, according to the image which TMZ  took.

Joe Jackson was a special guest at the Julian Rouas Paris kiosk selling Jackson Perfumes underneath the famous sketch of The King of Pop, to be honest this looks extremely pathetic and too make it worse what he’s doing could be considered illegal…

According to TMZ, Bravado International owns the trademark of all the things Michael Jackson, and is suing Julian Rouas Paris, claiming that they did not get permission to use Michael’s name or image.

Joe Jackson was once in charge of The Jackson 5, Michael Jackson, Janet Jackson and La Toya Jackson – now he can be considered as absolutely nothing. I’ve seen some people pitying him and all that, but I don’t think he deserves it – to be honest I personally don’t care what happens to him after the way he treated his children.