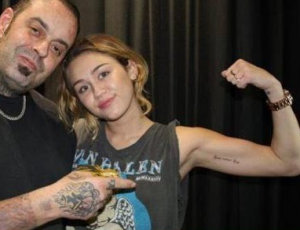 Well Ms.Miley Cyrus has done it again. The ex- Disney Channel rebel child added to her tattoo collection this weekend, making the grand total twelve. Yes, the 19-year-old actress/singer now has a total of one dozen tattoos.

Shortly after chopping off much of her hair and sporting a new scruffy bob, Cyrus was seen waking into Studio City Tattoo in California yesterday with her Aussie beau, Liam Hemsworth, along with a few other friends. Cyrus was the only one who got inked up, choosing the words “love never dies” for the inside of her bicep.

While there is debate over the tattoo being in honor of her relationship with Hemsworth, a more probable explanation is her father’s decision to call off the divorce with her mother last year. Between the new tat and hair, it looks like Miley is really trying to make a statement.