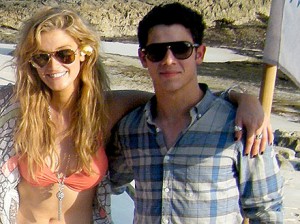 Nick Jonas, 19, and Aussie singer Delta Goodrem, 27, have recently split up. One of Delta’s representatives told people, “Nick and Delta have decided to mutually end their relationship. At this point in time, they are both focused on their careers as they go on different paths.”

A few weeks ago, Nick had an interview with Ryan Seacrest which may reveal some signs of a stressed relationship, even though everything seemed good on the outside. When talking about his time on Broadway in How to Succeed in Business Without Really Trying, he reveals signs that he may be too tired to keep up a relationship:

[I’m] interested to see what this [Broadway] schedule becomes as far as how tired I’ll be after these shows every night, because it is a pretty insane show as far as the dancing, singing, and acting goes. I think on Valentine’s Day I might make an exception and plan something. Stay up a little bit later than I usually would.

Later on in the interview, Nick talks about how much time the pair spend apart. “She [Delta] is going back and forth to New York and L.A. and Australia this year. She’s really excited. She’s doing ‘The Voice’ this year over in Australia. She’ll be back there quite a bit doing that.”

The couple were first seen together in June. Delta can join Miley Cyrus and Selena Gomez on the list of Nick’s exes.

Xfinity On Demand Awards Winner Announcement: Beyonce, Bridesmaids, Tosh.0 and SpongeBob SquarePants Watched the Most in 2011