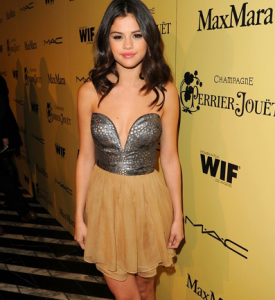 Selena Gomez attended the 2012 Women in Film Pre-Oscar party in a plunging Ani Lee dress. She attended the event at Cecconi’s restaurant with her mom and Vanessa Hudgens on Friday in Los Angeles. Other guests included Gwyneth Paltrow, Octavia Spencer, and Jessica Chastain.

Selena used the event to set the record straight about her new tattoo, which had previously been confused as a heart. “It’s a music note. Everybody thought that it was a heart for some reason, but music is a big influence in my life. I was named after a singer, I’m a singer and a lot of other personal reasons. So, that’s what I got.”

It seems like Selena is trying to break off from her Disney image as stars like Miley Cyrus have been attempting as well. The singer has recently confessed that Zooey Deschanel is her girl-crush. She was also spotted in a pair of very short jean cutoffs as she went out with boyfriend Justin Bieber, and is starring in an upcoming movie about college girls robbing a bank and getting busted out by some drug dealers.

Music Review: DMX ‘Make It Out’