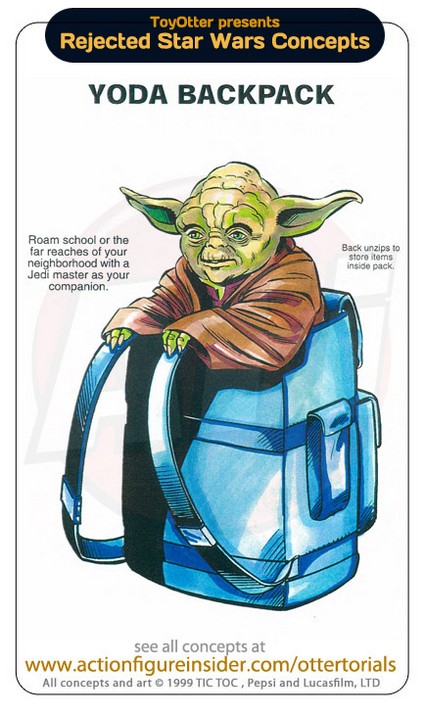 Jason Geyer is a writer for Action Figure Inside and posted a gallery full of rejected ideas for Star Wars merchandise. Now I know you must be thinking how did he get these? Well that’s simple, he helped to create them. In the late nineties, he and another co-worker were huge Star Wars fans working at a company that focused on promotional merchandise who had Pepsi as one of their clients. Both Pepsi and Star Wars had huge marketing budgets during Star Wars Episode I: The Phantom Menace but they only a selected few that were made into products, though many looked like they should’ve been made.

Here’s a couple of pictures that interested me, no doubt about it I would of bought all of these if I could have and had the money to do so.  Though some of these did get made, for example the Yoda back packs, Han Solo frozen in carbonite ice cube trays and etc.

Jason explained that these entire images featured weren’t even his favorites out of all the ideas they came up with years ago. Those were all featured four years ago when he revealed rejected Star Wars merchandise ideas for the first time, he even mentioned there being Bantha Slippers. The thought of owning Bantha Slippers completely blew my mind, an R2-D2 mini fridge is an excellent idea! They should seriously think about making one since me and I know many of you fans also would be willing to buy it.