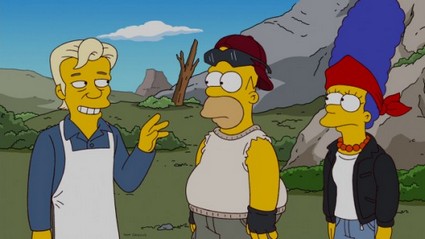 The Simpsons air tonight on Fox with a whole new episode called ‘At Long Last Leave.’  Tonight’s show features Wikileaks Julien Assange.  : The Simpsons are evicted from Springfield and join an off-the-grid community outside of town. But when Homer and Marge try to sneak back into Springfield, they are welcomed with hostility from their former friends and neighbors and begin to appreciate their new and more accepting home.

Our favorite cartoon family – The Simpsons – are about to celebrate a pretty awesome TV milestone. The 500th episode will air on Fox tonight. That’s a lot of donuts and Duff beer for Homer!

It’s hard to believe we’ve followed the adventures of Homer, Marge, Bart, Lisa, Maggie and the many residents of Springfield for so long! The show debuted as a half hour cartoon on December 17, 1989 which makes it the longest running animated series on American TV. Time even labeled it the Best Television Show of the 20th Century. The family also have a star on the Hollywood Walk of Fame.

Check out the sneak peek video below and don’t forget to tune in tonight at 8PM to Fox!