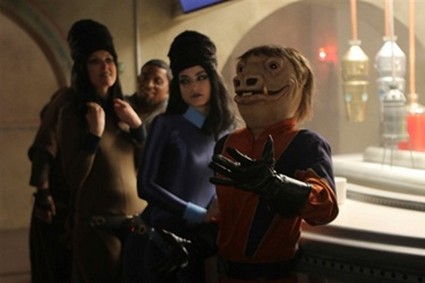 Last year during the Super Bowl, Volkswagen aired a Star Wars commercial that was easily one of my most favourite, in fact I really enjoyed it. This time they’re aiming for one of my favorite planets, Tatooine. They’ve also re-created the set of the Mos Eisley cantina.

Not much is mentioned on what they’ve planned for the commercial, only a teaser has been streamed along with a couple of pictures. From some of the pictures I see women with that hideous Snookie like haircut and some pig like creature who, in my opinion looks incredibly ugly. I have no idea where this is going, but I hope it doesn’t disappoint.
The commercial is supposedly to have the company’s Beetle, who ends up getting lost, and somehow it just ends up at the Mos Eisley cantina.

I’m not sure if it could top last years, that one seemed to be more original and completely realistic. Who hasn’t tried to use the force on objects within their homes? I know I sure did, and still do once in a while. The whole concept of the young boy with the iconic Darth Vader helmet and cape walking around his home trying to use the force, and utterly failing was really funny. But the ending was just hilarious how he starts using it on his family’s car in the drive way, which surprisingly starts to work. Then we see the boy’s father with the remote control pressing start.

So who knows maybe this commercial will be just as successful as the last, or it could possibly just end up like Alderaan. Who knows, but I hope it does us Star Wars fans proud and can actually make me laugh.

‘How to Rock’ Premiering February 4th