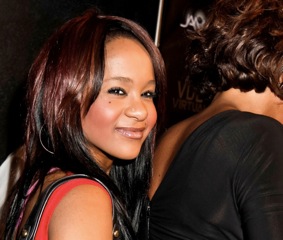 Bobbi Kristina Brown, 18, daughter of Whitney Houston and Bobby Brown was taken from the Beverly Hilton Hotel on a stretcher to Cedars-Sinai Hospital in Los Angeles yesterday (12.02.12), just a day after her mother passed away in the hotel, and was treated for stress and anxiety.

Bobbi’s father had been due to perform with his band New Edition in Nashville, Tennessee, last night but skipped the show in order to fly to Los Angeles – accompanied by fiancee Alicia Etheridge – to be with his daughter.

He said in a statement to Extra: “Obviously the death of her mother is affecting her, however, we will get through this tragedy as a family.  Again, I ask for privacy during this time.”

The previous evening, Bobby broke down in tears after taking to the stage just hours after learning of his ex-wife’s death.  At the end of one song, he looked up at the sky, where he blew a kiss and shouted: “I love you, Whitney.”

A relative of Bobby said he is “shattered and beyond devastated” at the news.

The source added to Us Weekly magazine: “He wanted to tell everyone about it before it hit the news. He didn’t want any of us to hear about it on television.  He could hardly get the words out when he called me. He was sobbing, and by the end of the call, I was sobbing too. He’s beside himself right now.”

Whitney and Brown were married from 1992 to 2007, and the pair were known for a volatile relationship that included periods of heavy drug use.

However, speaking about their marriage in 2009, Whitney admitted she had strong feelings for him.

She said: “I loved him so much. He was my drug. I didn’t do anything without him.”