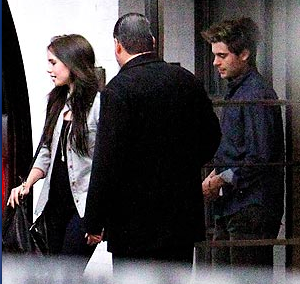 Zac Efron and Lily Collins might as well make their relationship official after they were seen out to lunch together on Tuesday, Valentine’s Day. The couple came onto everybody’s radar after they were spotted holding hands at STK restaurant in West Hollywood last week.

On Tuesday they were seen leaving the Soho House in West Hollywood. Zac was sporting a blue button-down and black pants as he trailed behind Lily, who wore all black (ironic for the holiday?).

Lily, 22, who is starring in the upcoming movie Mirror Mirror, had previously dated her Abduction costar Taylor Lautner, while Zac, 24, hasn’t been romantically linked to anyone since his split from longtime girlfriend Vanessa Hudgens last year.

Zac Efron AND Taylor Lautner? Lily is a lucky girl!