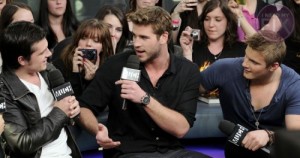 The Hunger Games crew is making their rounds in preparation for the premiere on Friday, March 23rd. The film is by far the most anticipated movie of the year.

Three leading guys from the movie, Josh Hutcherson, Liam Hemsworth and Alexander Ludwig, appeared on Much Music’s New.Music.Live. in Toronto on Monday.

Earlier Monday, the boys appeared on The Marilyn Denis Show. A new clip from the movie was released. It features Jennifer Lawrence, who plays Katniss, visiting with Hemsworth’s character, Gale, right after the reaping.