‘Bill and Ted 3’ The Script Is Complete 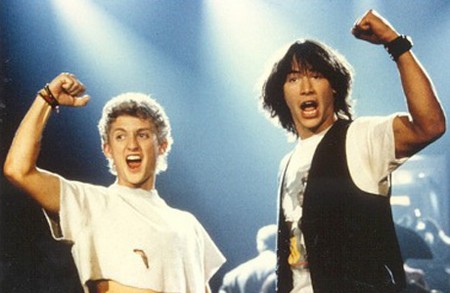 Keanu Reeves let his tongue slip back at the 2010 Toronto Film Festival on the possibility of there being a third film. Somewhere In April 2011 a script was about six weeks away. Now both Keanu and his co-star Alex Winter are confirming that the script is finally done.

Reeves was asked how Bill and Ted 3 was coming along, he said “Yeah, we have a script. We’re trying to put it together. It’s a good script too.”

There’s only a little bit mentioned on the plot of the film, he said “When we last got together, part of it was that Bill and Ted were supposed to have written the song that saved the world, and it hasn’t happened. So they’ve now become kind of possessed by trying to do that. Then there’s an element of time and they have to go back.”

It’s quite interesting that they were supposed to write the song that saved the world and haven’t yet, but I’m not too sure about it though. Both Keanu and Alex are excited to be on board with this film.

I’m very excited to see that another Bill & Ted’s Excellent Adventure is being made, it has been a while since I watched the first two and just hearing about this makes me want to give them a watch right now.

“The Boondocks” Coming Back?