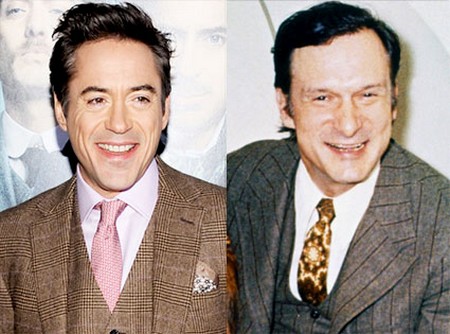 Both Imagine Entertainment and Universal have tried making a biographical film about Hugh Hefner, the founder and Chief Creative Officer of Playboy Enterprises. ‘Rush Hour’ director, Brett Ratner was supposed to direct this film along with the consideration of either Robert Downey Jr. or Hugh Jackman to play the role of Hugh Hefner.

But now the biographical film has gone to Warner Bros. instead, being produced by Jerry Weintraub who’s worked with both Sinatra and Elvis. My personal pic for the role of Hugh Hefner would be Robert Downey Jr. and since he has already acted in Sherlock Holmes which was distributed by Warner Bros., would there be a possibility of them picking him up for the role?

There is no confirmation of what direction the film will be taking; it’s still undecided which periods of Hefner’s life the films would include. But I have to ask, would people go and see such a film since we all know Hefner today as that old guy who’s surrounded with women all day every day. Would we be interested in knowing more?

Personally, I would see this movie. It’d be interesting to see what got Hefner to start this magazine and why he did it, and how he made it become so successful.