Josh Hutcherson on Preparing for Peeta 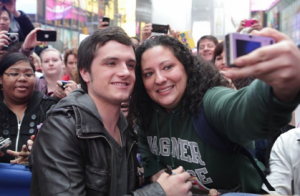 Josh Hutcherson stopped to take a picture with a fan as he made his way to his appearance on Good Morning America in New York City on Thursday (March 22).

On the show, the 19-year-old discussed what preparation he had to go through to play his character, Peeta, in The Hunger Games.

It wasn’t like a fun, go to McDonald’s and Taco Bell and enjoy that kind of food. I had to eat chicken and fish and all the very intense, protein-type food. I also had to work out with an ex-Navy Seal trainer, who’s like this crazy guy that makes me do awful things to my body but I guess it worked for the part. All for the better. Liam (Hemsworth) had to lose 50 pounds and dye his hair brown. I had to gain 50 pounds and dye my hair blonde. We should have just switched roles. It would have been a lot easier on our bodies that’s for sure.

Do you think it would have been better if Josh and Liam switched roles? The Hunger Games opened up in theaters last night at midnight. Have you had a chance to see it?

Music Review: J Cole ‘Drank in My Cup’ is Trash