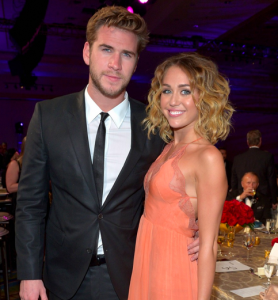 Miley Cyrus looked fresh in a peach Jenny Packham dress as she arrived at the Muhammad Ali’s Celebrity Fight Night XIII with her boyfriend, and The Hunger Games star, Liam Hemsworth. The event was held Saturday night at the JW Marriott Desert Ridge Resort & Spa in Phoenix, Az.

The 19-year-old was also joined by her mother, Tish Cyrus. The event is recognized as the nation’s best charity even and is attended by many celebrities. The event is hosted in honor of Muhammad Ali, and consists of many live auction items as well as live musical performances. The event has raised $70 million dollars in the last 17 years of existance.

Miley caused some stir at the event by sporting a ring on her left ring finger. Does this mean that Liam has decided to put a ring on it? While the couple has been dating on and off since 2009, and share a dog, I don’t think they are ready to get serious enough for marriage, especially in the peak of both of their careers. What do you think?