“The Boondocks” Coming Back? 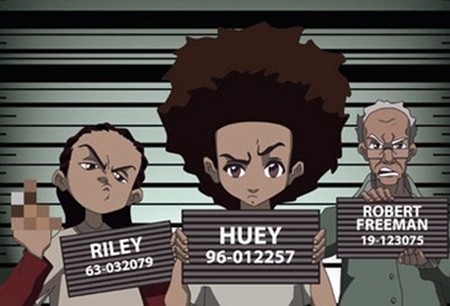 The Boondocks started out as a comic strip created by Aaron McGruder and later became an animated series on Adult Swim. Sadly the series ran for three years and fans have been hoping ever since its end that there would be some way to see it come back on the air, and now the fans’ prayers may just have been answered.

Regina King, who voices the main protagonists of ‘The Boondocks’ Riley and Huey Freeman tells Sway on Shade 54 that ‘The Boondocks’ may return but it’s not sure whether it will be another season or even a movie. When asked if it will never return she said, “I don’t think so. I talked to Aaron and it looks like they’re working things out. I’m trying to be positive because you know you say one thing, and the next thing you know it just all fell apart.” Adding, “But it looks strong like we’re coming back.”

Honestly I’m incredibly excited for this possibility, ‘The Boondocks’ has to be one of the funniest things I’ve seen in my life. I’d actually take the time to watch it if another series is made and aired on Adult Swim, or even pay to see a full length movie. But I think a movie would be much better, it would be two hours of none stop laughter.

‘Bill and Ted 3’ The Script Is Complete