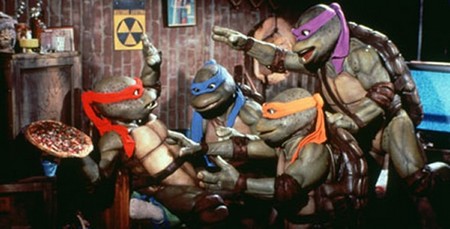 We’ve known for awhile that Michael Bay has been working to bring the classic Teenage Mutant Ninja Turtles back to the big screen in a live action adaptation. I was all for this live action film, I swear I’ve never been so excited in a long time… but that’s what I thought at first till I found out what they were doing with this film.

Michael Bay said at the 2012 Nickelodeon Upfront event that “When you see this movie, kids are going to believe one day that these turtles do exist, when we’re done with this movie. These turtles are from an alien race, and they’re going to be tough, edgy, funny and completely loveable.”

Instantly my jaw dropped to how stupid Michael Bay looked like when he said the sentence “These Turtles are from and alien race.” Why would someone ever come up with an idea so dumb? Not only are they rebooting the sewer-dwelling pizza eating masked green vigilantes, but also alter their back story? The original origin of TMNT is that they began as ordinary turtles but were transformed due to being exposed to toxic ooze. I have no idea how this new origin of TMNT is going to work, but I assume that it’s going to probably piss off a lot of fans like myself. I’d talk about this more but I’d rather not since I would be ranting for hours.

Bay will not be directing this film so we won’t be seeing tons of explosions and such in TMNT, he’s only producing it through his own company Platinum Dunes. Jonathan Liebesman will be directing the film and he’s done films like Wrath of the Titans and Battle: Los Angeles.

All I can say is that please, Michael Bay, don’t disappoint me and the fans of TMNT.