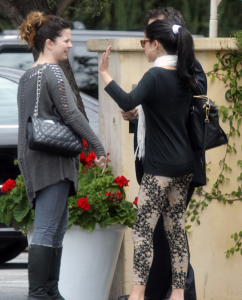 Selena Gomez was spotted going out to lunch with the owner of Disney Channel, Gary Marsh, and her mom, Mandy, on Wednesday (April 25) at Case Del Sole Ristorante in Studio City, Calif. Does this mean the 19-year-old might be making future plans that may be Disney-related? Only time will tell.

Selena has recently had the honor of being featured on Selena Quintanilla’s tribute album. Selena shared, “It was amazing! I was completely honored when they asked me to be on the tribute CD and when I went into the studio to record they actually had her vocals in the booth that she was in, so I felt like she was singing right next to me. It gave me chills! It was incredible and it was a great experience and it was a great song.”

Selena Quintanilla is arguably one of the best Latina performs ever, some calling her the Mexican Madonna. Selena was tragically murdered in 1995 at the age of 23 by the president of her fan club.

Madonna Is The New ‘Superwoman’