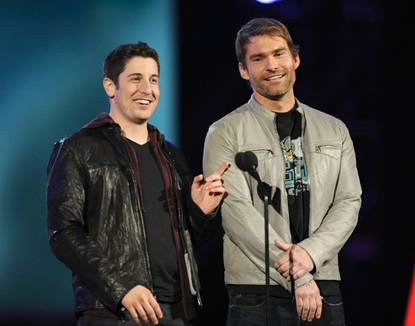 Jason Biggs who played as Jim Levenstein in the American Pie series, alongside the ever so popular Seann William Scott who played as Steven Stifler had a web chat on ‘The Sun’ and it was completely uncensored with them able to say anything they felt. One thing they mentioned that caught my curiosity was that they mentioned that they wouldn’t be surprised if another American Pie would be made after this, which makes me in some ways glad and upset.

Other than the three first films and American Pie: Reunion, I really didn’t like the other films. For one thing, none of them featured my personal favourite Steven Stifler, they usually always had a different Stifler in each film and they just couldn’t live up to his amazing character.

In fact that’s what made me ever so excited for the latest film, which I enjoyed a lot. I’ve always been a huge fan of the first three and this movie had all that I wanted in the original cast. I know many people who said they didn’t get why at times the events were incredibly unrealistic, but that’s what as a fan I already was prepared for.

So this film isn’t for those with a lacking of a sense of humor or that can’t be immature once in a while, but this movie did in fact bring back a lot of good memories and was incredibly nostalgic.

Check out the web chat here: