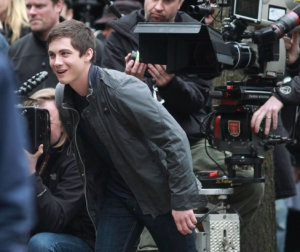 Nathan Fillion was also spotted on set playing the role of Hermes. He tweeted, “When there are quotes around your name, it means they don’t believe that’s your real name.” Other interesting changes include Daddario’s normally-brown hair was dyed blond.

In the movie, the friends Percy, Annabeth and Grover go in search of the golden fleece in the Sea of Monsters. The movie is set for release on March 26, 2013.