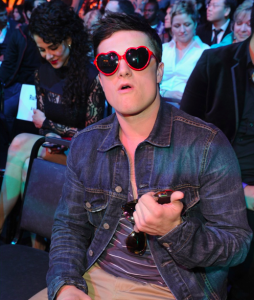 Josh Hutcherson rocked a pair of heart shaped glasses at the 2012 NewNowNext Awards, which were held in Avalon in Hollywood on Thursday night. Hutcherson, 19, walked away with the Next Mega Star award. Other nominees for the award included Michael B. Jordan, Lizzay Caplan, Elizabeth Olsen and Emily Vancamp.

The NewNowNext Awards are well known for picking up different fashion and actors that are about to blow up in the entertainment industry. Kelly Osborn is the host of this years show, which will air on Monday, April 9 at 10/9C on Logo.

Other performers and presenters include Neon Trees, Perez Hilton and Adam Lambert.