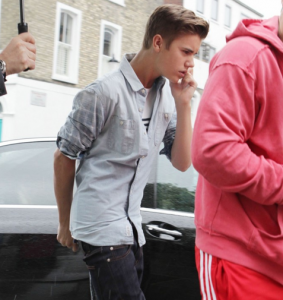 Justin Bieber is currently in London promoting his new CD and was spotted leaving his hotel and getting attacked by many female fans on Thursday (April 26). While Justin normally seems calm, sweet and collected, it seems that he threw a bit of a fit in London.

As Bieber was presenting his CD to over 200 different media sources, he cut the music three songs in. While “All Around the World” was playing, the 18-year-old abruptly stopped the music and said of the sound system: “It sounds so bad!”

Later, Bieber was asked about what he felt about being compared to Justin Timberlake.  “I sound nothing like Justin Timberlake.” He then introduced “As Long As You Love Me” by adding, “It’s a really, really, really good song, but it’s probably gonna sound like crap through these speakers.” It gets worse. When asked about how he made his CD he remarked, “I recorded it in a studio. Some little place. They didn’t know what they were doing.” That “little place” happened to be Indonesia, a country of 240 million people.

So what was Bieber’s problem? Maybe he was disappointed by the outcome of his CD, or maybe he is having problems with his girlfriend, Selena Gomez. Either way, Bieber acted completely uncharacteristically and disrespectfully.