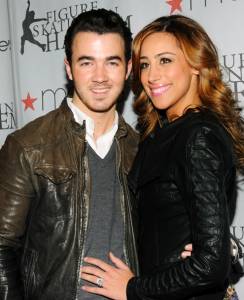 It has recently been announced that Kevin Jonas and his wife, Danielle, will be having their very own E! reality show called Married to Jonas. Ryan Seacrest serves as one of the series’ executive producers and provided some insight into the show.

“I vividly recall believing from the very first time that I met them that the Jonas Brothers would, without a doubt, become a worldwide cultural sensation,” he said.

When talking about the show he added, “When we learned that Dani married Kevin, our production team became curious about what life would be like for a young bride entering the excitement, and sometimes chaos, of a pop star’s life. Looking through the lens of young love, the show will examine the ups and downs of Dani and Kevin’s marriage, against the backdrop of their contrasting family cultures, traditions and individual careers.”

The couple got married in 2009 and since been dealing with the celebrity lifestyle and adaption to married life. The series will show this to the world, as well as follow the brothers as they make their next CD. The show will premiere on E! on August 19th at 10 p.m.