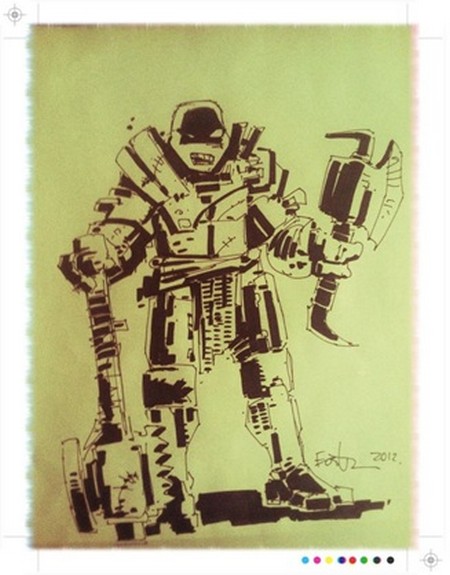 For a while now many fans like me have raged about Michael Bay’s reboot of the franchise, I’m surprised to say that Kid Cudi has revealed what could be the first piece of concept art from his upcoming Ninja Turtles reboot.

Instantly seeing this has made me feel even more worried for this reboot, I don’t remember any of the Ninja Turtles having a giant mace and hand axe wearing heavy armor… To be honest it looks more like a hybrid of Turtle and Transformer. Though I must say that at least the structure of the body looks satisfactory, it reminds me of TMNT in the early years like how they looked in the 80’s and 90’s. This drawing is the work of the Turtles co-creator Kevin Eastman, no offense but I’m just not feeling it.

Apparently the sketch was given to Kid Cudi as a gift, which could be a little hint thrown out there saying that he might be involved in this project in some way.

Kid Cudi Tweeted “To everyone with doubts & concerns about the new TMNT reboot, trust me; there is NOTHING to worry about. Trust. Everyone will be pleased!” Kid Cudi you’re a very talented rapper, I love tons of your songs but it’s hard not to worry since every time there’s new information leaked or what not on this reboot it just keeps making me come to the conclusion that Michael Bay is an idiot and nothing more.

There’s no official word whether this is concept art for the new film, I seriously hope it isn’t.