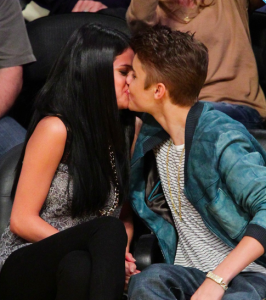 Selena Gomez and Justin Bieber attended an LA Lakers game on Tuesday night. The couple shared a smooch when they were caught on a kiss cam. While Selena was rooting for the Spurs, Justin was team Lakers, but the Spurts came out on top 112-91.

Selena made an appearance on Dancing With The Stars earlier that night. Watch the video of her performance of “Hit the Lights” below. Today (April 18), the couple was seen out running errands before Selena went to tape her appearance on Jimmy Kimmel Live.

Justin tweeted today that his album Believe is now all wrapped up. He said, “just finished cutting one of the most important records of my life. an amazing and strange feeling at the same time. #HONORED.”